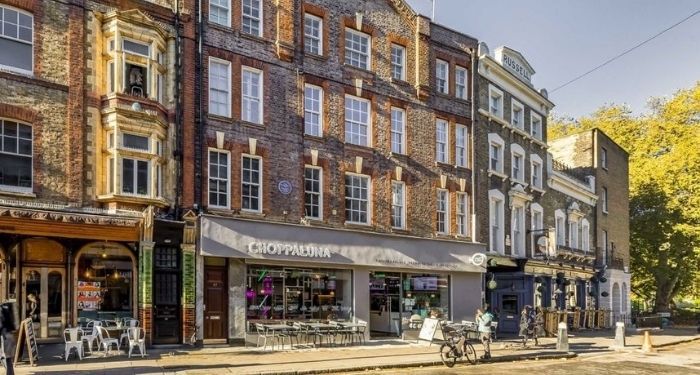 Ever wanted to own a piece of literary history? Fans of Mary Shelley, now is the time: her former residence on London’s Marchmont Street is for sale.

Listed at approximately $1.3 million US dollars, the apartment was home to Mary Shelley, as well as husband Percy Shelley. The building has a blue plaque commemorating their history within it. The apartment, which is located inside a brick facade Victorian building on the first floor, has two bedrooms, one bathroom, as well as a private terrace and open reception area. It has had a number of updates making it modern, but some of the original features remain, including the wood flooring.

The apartment is in the heart of Bloomsbury, with all of its own literary history and bookish attractions. But it’s also near to St. Pancras Old Church and its graveyard, where Mary Shelley first courted Percy at the age of 16.

Mary and Percy’s relationship wasn’t well received by Mary’s father for a number of reasons, including the fact Percy was older than her, already married, and had his own young child. The pair ran off at the end of July 1814 and are caught in a terrible summer storm in the middle of the English Channel.

Though it was a treacherous crossing, the pair, along with Mary’s stepsister Claire Claremont, made it to France and embark on a six week journey together. France is in the midst of war, and the trio make their way to Switzerland by every possible means at the time, including donkey, mule, and by foot.

A lack of money is what sent them running back to England shortly thereafter, where Mary and Percy took residence at Marchmont Street. Mary was pregnant at the time with a daughter who died after her premature birth, and the pair remained unmarried until 1816 — the same year they traveled back to Switzerland to summer with Lord Byron and where Mary developed her idea for what would become Frankenstein.

In 1818, the year Frankenstein was published, was the same year the Shelleys moved from Britain to Italy. A few years later after Percy’s death by drowning and the loss of two more children, Mary moved back to Britain with her surviving son.

This piece of literary history will likely go fast, given its popular location and what it has to offer inside — and in its storied former residents. You can explore the listing and contact the agency for more information, photos, specs, and to book a tour.