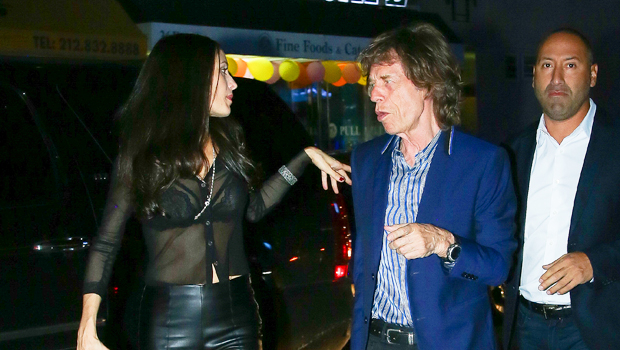 Mick Jagger and his girlfriend Melanie Hamrick were the picture of bliss as they took a romantic stroll surfside in Miami.

Mick Jagger and his girlfriend Melanie Hamrick looked every inch the loved up couple as they were spotted hitting the beach in Miami on Nov. 23. As you can see in the photos here, the Rolling Stones lead singer, 78, and the 34-year-old former ballerina, who share son Deveraux, 4, were all smiles while enjoying the sunny, surfside stroll.

For the fun day out, Mick kept it casual in a black V-neck tee and matching joggers. He rocked a straw hat and sunglasses while carrying his shoes to enjoy the sand barefoot. Melanie followed his lead with her sandals in hand, as she walked alongside the musician in a red floral sundress and wrapped her shoulders in a black sweater. The happy pair were joined by a friend for the idyllic beach excursion.

Later on, Mick was spotted soaking up the sun in a lounger, as he sported a pair of bright yellow pants and a multicolored jacket. With the rock icon looking to be the epitome of relaxation, Melanie laughed as she snapped some photos of her famous beau. On his Instagram, Mick shared a few of the snaps, with the caption, “Enjoying Miami… See you at the show tonight!”

The sun-kissed couple have been together for almost eight years. They reportedly met in Japan while the Rolling Stones and the American Ballet Theatre were both touring in the country, per Page Six. In 2016, they welcomed Deveraux, their first child together. Back in July, Melanie shared a rare photo of their boy on her birthday, She captioned the cute family snap, “Feeling all the love today. Thank you everyone for the wonderful messages.”

In a 2017 interview, Melanie said she found it “insulting” to be labeled as Mick’s “baby mama.” “I definitely don’t think of myself as a ‘baby mama,’” she told Marie Claire. “Yes, in the technical sense, I’m not married to the father of my child. But I am in a great, wonderful relationship with him. So I don’t see myself like that.”