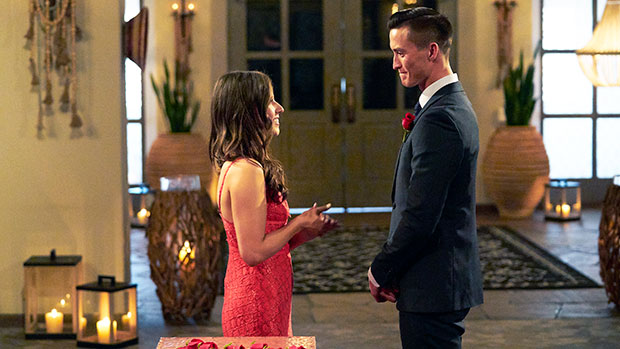 Holy PDA! ‘The Bachelorette’s Katie Thurston and John Hersey showed off their love for each other in a new video that included kisses, date nights, so much romance.

Katie Thurston and John Hersey are taking a second chance on their relationship. John gave fans a glimpse into his romance with Katie in a new TikTok video he posted on November 23. The adorable, PDA-filled video featured John and Katie holding hands, kissing, and John giving Katie a piggyback ride.

Katie and John haven’t spoken publicly about their rekindled relationship just yet, but it’s clear they’re very happy with each other. In the video, Katie had the biggest smile on her face after meeting up with John and sharing a kiss.

John captioned the video, “I really like it here.” He also tagged Katie’s TikTok handle. She later responded, “Me too.” John and Katie both reposted the adorable video on their Instagram Stories.

Katie revealed that she was dating John again on the final day of her “12 Days of Messy” challenge. The former Bachelorette dedicated the Taylor Swift song “Begin Again” to John. The song is notably about the end of one romance and the start of another. Rumors had been swirling for a while about Katie and John since they had been publicly hanging out post-Bachelorette.

Katie and John first met during The Bachelorette season 17. He was actually sent home in week two of the competition, and Katie ended up getting engaged to Blake Moynes at the end of the season. However, the couple announced that they were breaking up and ending their engagement on October 25 after less than a year of dating.

“It is with mutual love and respect that we have decided to go our separate ways,” Katie and Blake said in a joint statement. “We are so grateful for the moments we shared together and the entire journey that has unfolded this year, but we ultimately have concluded that we are not compatible as life partners, and it is the most caring choice for both of us to move forward independently.”

The Guy Who Knows Where All of Trump’s Bodies Are Buried Is Cooperating With the January 6 Committee
Kylie Jenner and Travis Scott’s W Magazine Cover Leaked in Wake of Astroworld
Nicolas Cage Will Finally Play Dracula in Upcoming ‘Renfield’ Movie for Universal!
‘Yellowstone’ Recap: Beth & Rip Plan To Marry Soon & Jamie Confronts Garrett
The Strokes, LCD Soundsystem, and Le Tigre to Perform at 2022 This Ain’t No Picnic Festival