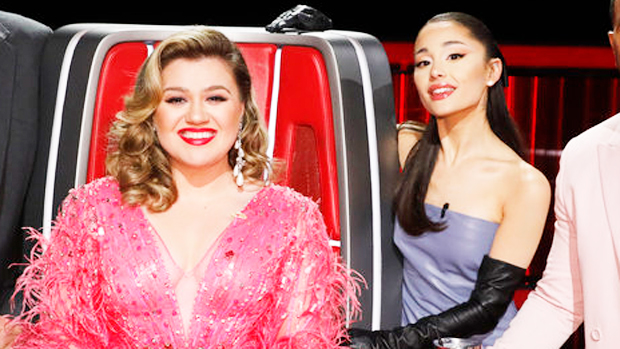 It’s a pop diva show down! Kelly Clarkson & Ariana Grande battle it out on the latest NBC show ‘That’s My Jam,’ signing hits in a pop medley sing-off. Watch the preview clip here!

Pop divas go mic-to-mic! Ariana Grande, 28, and Kelly Clarkson, 39, took a break from their coaching gigs on The Voice and showed off their musical talents in a sing-off battle for the new NBC show That’s My Jam. In a clip for the new show, which comes from Tonight Show host Jimmy Fallon, the pop stars partake in a “Mixtape Medley,” singing various hits like Britney Spears‘ “Oops I Did It Again,” Cher‘s “Believe,” Shania Twain‘s “Any Man of Mine,” and more. Also in the clip are Kelly and Ariana’s The Voice co-hosts, Blake Shelton and John Legend, cheering the women along as they belt out the pop hits on cue.

The new series is an hourlong variety show that draws its inspiration from some of the Tonight Show‘s most popular games. On the series’ website, the show is described as featuring “two teams of two celebrities competing for a charity of their choice in a series of music, dance, and trivia-based games and musical performances.” Considering some of Jimmy’s popular moments from his nightly program, celebs will engage in games like Launch the Mic, Don’t Drop the Beat, Wheel of Impossible Karaoke, and more.

NBC and Jimmy may have hit the jackpot with this new show idea, considering the kinds of viral moments the Tonight Show garnered with similar concepts. Ariana herself made waves in 2015 with the show’s “Wheel of Musical Impressions,” impersonating major stars like Christina Aguilera singing “The Wheels on the Bus,” and the like. That video has since gained over 1.5 million views on YouTube, and other analogous moments from Jimmy’s show have received similar praise, with millions of views from doting fans. We’re excited to see what celebs will show up and show off for the new show!

The sneak preview episode of That’s My Jam airs on Monday, Nov. 29 on NBC.

‘Guardians of the Glades’ Star Dusty Crum Nearly Loses Leg In Car Accident
070 Shake and NLE Choppa Share Video for New Song “Lose My Cool”: Watch
Rihanna Shut Down Pregnancy Rumors With a Very Rihanna DM
Billie Eilish Changed Her Look Yet Again, And I Can’t Keep Up Anymore
Adele Shades ‘The Real Housewives’: I Don’t Watch ‘Because My Brain Will Die’