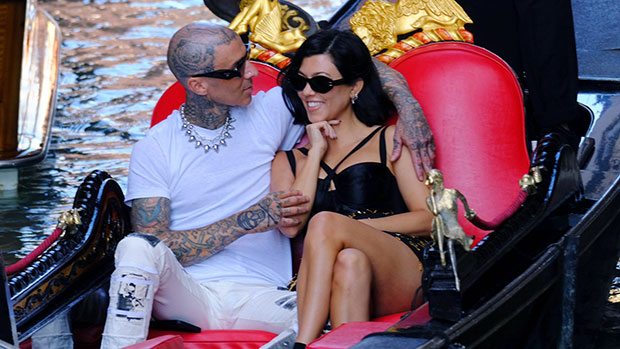 Kourtney Kardashian and Travis Barker reportedly ‘can’t wait’ to plan for their upcoming nuptials after a romantic engagement. Find out more about their wedding plans here!

Reeling in post-engagement bliss! Kourtney Kardashian, 42, and Travis Barker, 45, are having a whirlwind week after Travis popped the question on Sunday, and now, they’re sharing some details about their upcoming wedding plans. A source close to the couple spoke EXCLUSIVELY with HollywoodLife to discuss how much the Poosh founder and Blink-182 drummer “can’t wait” to tie the knot.

“They’re planning a small, intimate wedding and they’re only planning on inviting those closest to them,” the source revealed, adding how the couple’s in a “positive space” and only wants to be surrounded by people who have “supported” them. “Honestly, in their minds, as long as they have each other, the day is already considered perfect.”

So have the lovebirds set a date? According to our source, Kourtney and Travis are “still playing around with a few dates” for their walk down the aisle, also “bouncing around a couple of ideas” in terms of location. “Due to Travis’s fear of flying, it likely won’t be a far away destination wedding,” the source added, noting how the two just wanted to “enjoy their special day.”
Following the news of their whirlwind engagement, a source close to the KarJenners revealed to HL that the family, including Kourtney’s three children, were beyond thrilled. Kourtney shares Mason, 11, Penelope, 9, and Reign, 6, with ex-boyfriend Scott Disick. “The kids are super happy about this, as is Kourtney’s entire family,” the source said.

“They adore Travis and they love their blended family,” the source continued, adding that Travis treats his wife-to-be’s children “like his own.” The fact that Travis is “extremely hands on” and a “good father” to his children, whom he shares with ex-wife Shanna Moakler, is “one of the things that attracted” Kourtney most to him, the insider added.

Travis popped the question on a beautiful beach in Montecito, California with a stunning oval diamond ring designed by Lorraine Schwartz, who revealed that the musician was involved in the creation of the stone. “I worked on it with Travis and he was a really big part of it,” the designer told PEOPLE following the engagement news. “He was really hands-on in the whole making of it. It’s gorgeous and they’re happy.”