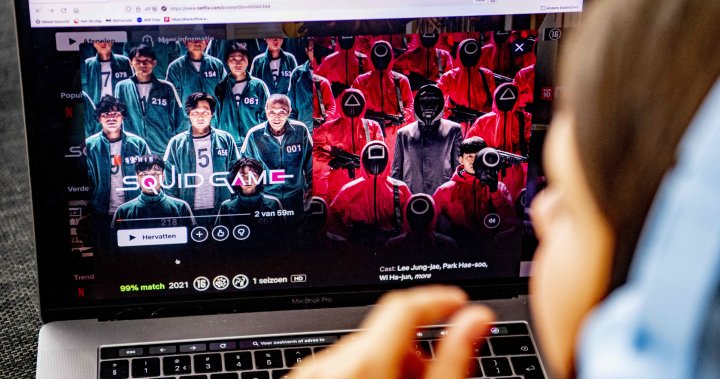 The massive popularity of the Netflix series Squid Game which features adults playing children’s games turned deadly, has led to fears among Quebec parents and school boards that the violence is being mimicked on school playgrounds.

Guillaume Taillon-Chrétien said his eight-year-old daughter came home one evening last week visibly shaken up, afraid to return to school. “She told me older kids were playing the games from Squid Game,” said Taillon-Chrétien, whose daughter is in Grade 3 at an elementary school in Massueville, northeast of Montreal.

He said the series is “absolutely not suited” for young children, but one girl in the school was playing the role of a doll who determines which characters die. “And she was reproducing it, reproducing when they get shot, lying face on the ground,” he said.

Several school boards in the province have recently issued statements warning parents about students imitating the games on playgrounds. The South Korean series features 456 desperate, indebted adults fighting each other to the death for a chance to win a prize worth roughly $48 million.

Sylvain Racette, director general of Riverside School Board in the Montreal suburb of Longueuil, said the board sent a notice to parents Monday because it wants them to understand how disturbing Squid Game can be. Racette said he was concerned about reports from other schools that had witnessed kids mimicking the show.

In the first episode, tournament participants play a twisted version of the children’s game “Red Light, Green Light” in which those who are caught moving during the red light by the doll character are shot dead.

The show is rated for mature audiences only, and schools from Australia to the United Kingdom are reportedly asking parents to make sure their kids don’t watch it following reports of Squid Game play at recess.

“We wanted to make sure all our community knows what this show is about,” Racette said. “And that they take the time, as I did with my two boys, nine and 13 — I sat down with them to talk about it. It’s important that we all do that.”

1:21
Hollywood films crews to strike next week unless deal reached with producers

Hollywood films crews to strike next week unless deal reached with producers – Oct 13, 2021

Riverside School Board’s statement said the “violent storyline promotes a feeling of confusion among young audiences and accentuates the impact of the shocking images or, worse, normalizes or desensitizes acts of violence.”

Montreal psychologist Nadia Gagnier said that for young children, parents provide the most influence and guidance. She said stopping children from watching Squid Game isn’t enough; parents should discuss the phenomenon as a way to reassure their children and build trust.

“Everybody is talking about it, so pretending nothing is happening, I don’t think it’s the best approach,” Gagnier said.

Taillon-Chrétien said he was surprised to hear his daughter talk about the show, since he and his wife had watched it late at night to prevent their children from seeing it.

He said his daughter initially had a hard time opening up, but once she did, she was emotionally disturbed by what had been going on at school. “It made my blood boil. It’s really not a show made for kids,” he said. “I know it’s fiction, but it’s so violent.”

“We can’t be dramatic and say they are all future psychopaths,” she said. “Yes, these images can be impressive for young people, which can generate nightmares and anxiety.

“But these are symptoms that are more probable to occur in very young kids.”

What parents need to watch for, Gagnier said, is for children who are already prone to aggressive behaviour and violence, then “the show will add another layer.”

For Rose Deschênes, a teacher at an elementary school in Ste-Julienne, in Quebec’s Lanaudière region, it was already difficult to teach children how to make good choices when it comes to violence and video games.

“This is the straw that breaks the camel’s back,” Deschenes said. She said she noticed young children imitating games from the show on the playground. She said themes from Squid Game were also showing up in students’ artwork, so she decided to watch it.

“It’s sadly impressive how similar it is,” Deschenes said. She acknowledged, however, that Squid Game is not the first and won’t be the last violent phenomenon to enthrall children.

Gagnier said that when it comes to the violence on the show, as with problems wrought by social media, having honest conversations is more beneficial than repression.

“But for sure, any parents who are allowing their children under 18 to watch ‘Squid Game’ are asking for more trouble and are making their own parenting life harder,” she said.