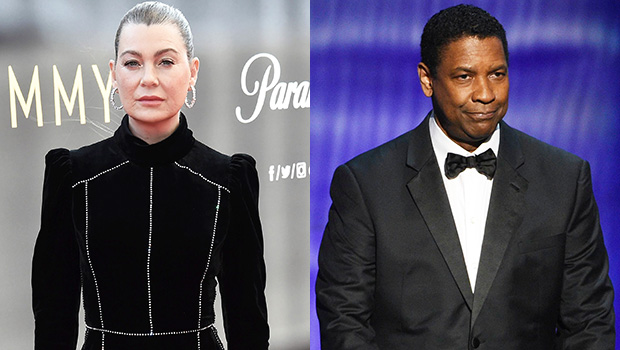 Although Ellen Pompeo has the ‘utmost respect’ for Denzel Washington, she exchanged words with the actor amidst a heated exchange when he directed a 2016 episode of ‘Grey’s Anatomy’.

Denzel Washington went head-to-head with Grey’s Anatomy star, Ellen Pompeo, when he directed an episode of the show that aired in Feb. 2016. Ellen discussed her experience on her podcast Tell Me With Ellen Pompeo while chatting with her guest — and former Grey’s co-star! — Patrick Dempsey. She explained that her fight with Denzel occurred while she was filming and decided to yell an improvised line at another character on the show during the scene.

“I was like, ‘Look at me when you apologize. look at me!’” she revealed, sharing what she screamed at the fellow actor on-set. “And that wasn’t in the dialogue. And Denzel went HAM on my a**. He was like, “I’m the director, don’t you tell him what to do.’” Ellen recalled being set off by Denzel’s response. “I was like, ‘Listen, motherf***er, this is my show. This is my set. Who are you telling?’”

Despite the incident, Ellen confirmed that she has the “upmost respect for [Denzel] as an actor and director.” She also said that she and Denzel were on totally fine terms after going through it for a minute. “We didn’t get through it without a fight, but that’s actors for you — passionate and fiery,” she continued. “That’s where you get the magic, and that’s where you get the good stuff. So, it was an amazing experience. It really was.”

Of course, with Patrick as her guest on this episode of the podcast, Ellen also had a lot of even more fond memories to talk about. Patrick left Grey’s Anatomy in 2015, but returned for a few cameos during season 17 in 2020 and 2021. He and Ellen have remained friends since his departure from the long-running series, which returns for its season 18 premiere on Sept. 30.

“It’s really great when you run into people who have been so profoundly impacted by the show,” Patrick admitted, while discussing his return to the series. “You know, their eyes light up, and they’re happy to see you, and it’s like…you have to hold that for them. It’s really quite special because anywhere you go in the world, people know you anywhere, and they greet you in a positive way. And that’s really lovely. It’s really special.”