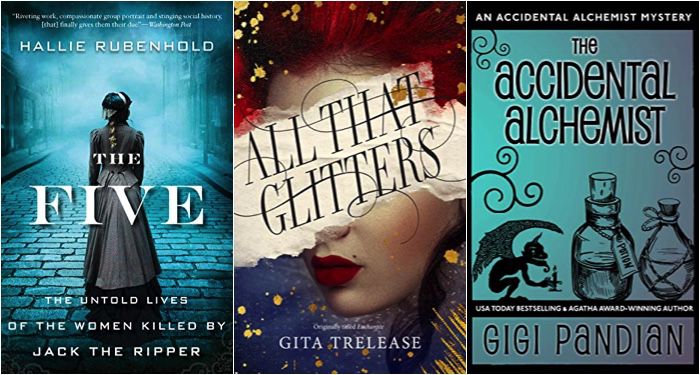 This Is Where I Leave You by Jonathan Tropper for $2.99

Annihilation by Jeff VanderMeer for $2.99

Stamped from the Beginning by Ibram X. Kendi for $4.99

The Black Witch by Laurie Forest for $2.99

Fifteen Hundred Miles from the Sun by Jonny Garza Villa for $1.99

The Revisioners by Margaret Wilkerson Sexton for $1.99

The Future of Another Timeline by Annalee Newitz for $2.99

The Trial of Lizzie Borden by Cara Robertson for $2.99

Cemetery Boys by Aiden Thomas for $2.99

The Disordered Cosmos by Chanda Prescof-Weinstein for $4.99

When the Moon Was Ours by Anna-Marie McLemore for $2.99

These Toxic Things by Rachel Howzell Hall for $4.99

The Book of Lost Saints by Daniel Jose Older for $2.99

Sharks in the Time of Saviors by Kawai Strong Washburn for $2.99

The Mere Wife by Maria Dahvana Headley for $2.99

The Black Friend: On Being a Better White Person by Frederick Joseph for $1.99

The Truth Hurts by Rebecca Reid for $1.99

The Midnight Lie by Marie Rutkoski for $2.99

Every Heart a Doorway by Seanan McGuire for $2.99

The Misadventures of Awkward Black Girl by Issa Rae for $1.99

Commonwealth Games boss wants to discuss Tom Daley’s eye-opening LGBT+ concerns
Kanye West Will ‘Do Anything’ To Get Kim Kardashian Back: He’s ‘Very Upset’ She’s Dating Pete Davidson
Just What the Quack Ordered: Dr. Oz Expected to Announce Pennsylvania Senate Run
“These Girls Were Just a Means to Support Her Lifestyle”: The Case Against Ghislaine Maxwell Gets Underway
Ruth Wilson to star in The Human Voice at Harold Pinter Theatre: tickets, dates and prices