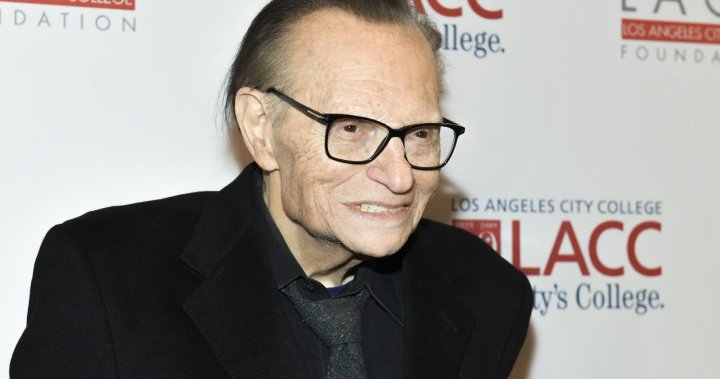 “For 63 years and across the platforms of radio, television and digital media, Larry’s many thousands of interviews, awards and global acclaim stand as a testament to his unique and lasting talent as a broadcaster,” the statement read.

The news comes just weeks after King was reportedly hospitalized after contracting the novel coronavirus.

According to both CNN and ABC News, the 87-year-old had been hospitalized in Los Angeles after testing positive for the virus.

Ora Media said funeral arrangements and a memorial service will be announced later “in coordination with the King family.”

A longtime nationally syndicated radio host, from 1985 through 2010 King was a nightly fixture on CNN, where he won many honours, including two Peabody awards.

King conducted an estimated 50,000 on-air interviews. In 1995 he presided over a Middle East peace summit with PLO Chairman Yasser Arafat, King Hussein of Jordan and Israeli Prime Minister Yitzhak Rabin. He welcomed everyone from the Dalai Lama to Elizabeth Taylor, from Mikhail Gorbachev to Barack Obama, Bill Gates to Lady Gaga.

The talk show host had battled through a number of health issues in the last several years.

In 2017, King revealed he had been diagnosed with lung cancer, and in 2019 he was hospitalized after suffering from angina.

The cause of death was not immediately clear.

-With files from the Associated Press

Minari Is a Beautiful Portrait of a Family in Flux
Drag Race judge Ross Mathews proudly shares engagement with the world: ‘Fiancé, you stay!’
Books, Art, Wallpaper, and More Gorgeous Home Items From Black-Owned Businesses
Zack Snyder’s ‘Army of the Dead’ Shambles to Netflix on May 21st! [Poster]
Alison Sweeney Teases Sami’s Return To ‘Days Of Our Lives’: She’s ‘Up To No Good’