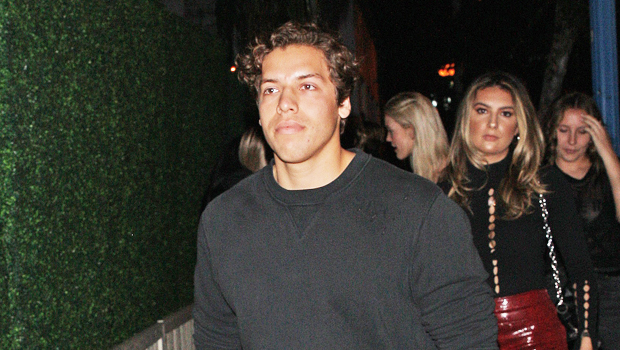 Joseph Baena has followed in Arnold Schwarzenegger’s footsteps…straight into the gym. Here’s a look at all the times that Joseph was the mirror image of his legendary bodybuilding dad.

“Teaching the boys a lesson in posing,” Joseph Baena captioned a Dec. 2020 Instagram post, and if there’s anyone who knows how to pose, it’s the son of Arnold Schwarzenegger. Since starting his bodybuilding journey, Joseph has become Arnold’s muscular doppelganger, and this is no more evident than when Joseph recreates one of Arnold’s famous poses. Whether it’s showing off his toned chest, flexing his bulging biceps, or giving everyone a glimpse of his glutes, Joseph is the exact image of his father.

“I love my dad!” Joseph shared EXCLUSIVELY with HollywoodLife in November 2019. “He is a great father! That’s really all I have to say about him! We train together. We eat together. We do many things together.” Joseph also shared the Arnold is incredibly supportive and encouraging, always telling his son to “put 100% into what I’m doing. Whether that is training, working, school. Just give it my all.”

“I think that was huge for me!” added Joseph, and frankly, the results speak for themself. Since starting his fitness journey, Joseph has transformed into his father’s look-alike, so much that it’s uncanny. Yes, Arnold carved a place in bodybuilding history when he won Mr. Universe in 1967 at the age of 20, but his legacy can be seen whenever his son strikes a pose.

The COVID-19 pandemic didn’t stop Joseph’s fitness journey. While wearing a mask and practicing social distancing, Joseph showed off his work on Jan. 12, 2020, by “running through some movements.” For a second, it seemed as if Joseph was doing his father’s “Greatest Hits,” hitting all the poses that have become synonymous with Arnold and bodybuilding. In particular, one pose had Joseph turn his back to the camera, his biceps and back flexed. It as if a young Arnold had traveled through time to 2021, just to give everyone a show.

Many were happy to see 2020 leave. It was a year of political strife, a global pandemic, wildfires, and cancellations. However, Joseph wanted to end the year on a high note. “Let’s finish [2020] strong people!!” he captioned a post he shared on Dec. 31, 2020. In the shot, Joseph wore a mask, and the resemblance to his father was eerie.

“How it started VS how it’s going.”

Even bodybuilding icons like Arnold started off as babies. Joseph gave fans a glimpse at not just his bare chest in late November 2020 but also a rare look at a baby photo. Joseph – who is famously the son of Arnold’s love affair with Mildred Patricia Baena – showed a shot of him as a young child (“How it started”) and then a picture of him posing just like his dad (“How it’s going.”)

Do you have tickets? Tickets to what, you ask? Tickets to the gun show. Joseph showed off his own “guns” in late September 2020 by flexing his muscular arm, all while wearing the shortest of gym shorts. “Loading…” he captioned the shot, either making another pun on the term “guns” or possibly referencing how the rest of his shorts were barely there.

“When the squad rolls up to the gym,” Joseph captioned a shot featuring his fellow bodybuilders Joe Andrews and Dominick Nicolai. In the pair of IG shots, all three men look buff. In the second photo, Joseph looks exactly like his father, flexing an arm and legs to show off all his hard work.

Joseph seems to be proud of his back, and considering how ripped it look, who could blame him? It seems that it doesn’t take much to get him to pose. In April 2020, while overlooking a stretch of what appeared to be a California highway, Joseph ditched his shirt and flexed his muscles. “Perfect time to practice some posing!” he captioned the shot of him recreating one of his dad’s iconic moves.

Joseph, like many, had some optimism heading into 2020. Arnold’s son shared a shot from the iconic Gold’s Gym in Venice Beach, the same gym where Arnold used to train, on Dec. 31, 2019. “Anyone else gonna go into 2020 with a sick pump?” asked Joseph, unaware of what laid ahead. Still, he looked great while mimicking his dad. “What are you training on NYE?”